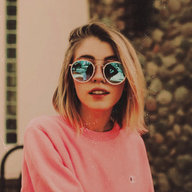 Date of Birth: 12th July, 2035
Current Age: Sixteen
Five story fire as you came
Love is losing game​
Basic Appearance: Rowan is slightly smaller than average both in height and general body size, she would be considered petite. She hit's 5'2 at her tallest and doesn't really worry about trying to enhance her height at all as she likes that she is small. Rowan is naturally a brunette, but she dyes it blonde often to give her more of a distinction from her sister Elsie. Though they are not identical, they often look alike. She has crystal blue eyes which she dislikes as she finds them "common" and wishes she had the brown eyes of her sister. She's physically fit and has a Capricorn tattoo on her right wrist, a semicolon tattoo behind her hear, an xoxo tattoo on her index finger and a tattoo dedicated to her father on her right shoulder.
Personality: INFP Personality type - The Mediator
Rowan has a very "my world is on fire around me" view to life which can often get her into a lot of trouble when she's not careful. She's highly expressive and easily gets intoxicated with life. She feels all her emotions deeply and sometimes struggles with keeping them contained. Brutally honest, sometimes to the point of hurting others and she's relentless in her pursuit of anything. Her family nicely calls her stubborn, but she's almost like a predator hunting for prey when it's something she really wants. She does know how to take herself down a few knots though and has a variety of hobbies, such as photography and poetry that calm her. Rowan, for the most part, is resistant to change and likes to micro manage things because she can't always control the things in her own life so she tries to control others, often to the detriment of her own relationships. She is incredibly hard to get to know because she doesn't like talking about herself or her own experiences. She loves people and being around them but she's not great at getting to know people and often finds it a hassle for a couple of conversations. She's open and affectionate with the people she loves and she believes very strongly in chances - giving second and third and fourth chances. It's hard to earn her trust and even harder to break, though she will often insinuate her trust breaks easily, she's incredibly loyal to certain people. She finds it hard to keep up with multiple relationships and finds her life much simpler with the least amount of effort, though she fights tooth and nail to keep the relationships she allows herself to form. She knows the pain of rejection and public humiliation and tries to avoid those scenarios at all costs.
Immediate Family: Mother: Nadine Baros
Father: Wyatt Baros
Brothers: Isaak, Lukas and Zennon
Sisters: Azelea Baros, Elsie Baros and Grace Baros
One I wished, I never played
Oh, what a mess we made​
Pets: A Cat named Capri (born in 2050)
A Duck named Matilda - rescued from Transfiguration class (born 2048)

School: Hogwarts New Zealand; Gryffindor
Blood Status: Pureblood
Heritage: American/European
Interests or Hobbies: Poetry and Photography
Strengths: Honesty; Rowan likes to speak the truth, but more broadly presenting herself in a genuine way and acting in a sincere way; being without pretence; taking responsibility for her actions and feelings.
Love; Rowan values close relationships with others, in particular, those in which sharing and caring are reciprocated; being close to people.
Perspective; Rowan is able to provide wise counsel to others; having ways of looking at the world that makes sense to herself and others.
Humour: Liking to laugh and tease; bringing smiles to other people; seeing the light side; making (not necessarily telling) jokes.

Flaws: Fatal Flaw: Wrath - when angered, Rowan is hard to call off and generally likes to complete her mission.
Major Flaws: Pride, Fierce, Cruel
Minor Flaws: Dependant, Flirty, Overprotective
Values: Courage, Humanity, Wisdom, Transcendance
Played out by the band
Love is a losing hand​
Describe your character in five words: Wise, Violent-Prone, Protective, Caring, Resistant
Best school subjects: Charms, Divination, Care of Magical Creatures
Worst school subjects: History of Magic
Current Job: Student
Plans for the future: Travel the world with Elio
Patronus: Lion Rowan is loyal to a fault and doesn't always pick the best course of action, though she often does try to weight the pros and cons, she does so only with the intention of biding some time. Nine times out of ten she already knows what she's going to pick and continues with her already though out plan
Patronus memory: When Elio told her he loves her
Boggart: Public Humilation - Being humiliated in a big group - publicly. She's already faced this at least once when she was humiliated at the Valentines Dance by Elio after she found out he was because he rejected her
Ridikkulus: Elio telling her he loves her
Animagus: Lion
More than I could stand
Love is a losing hand

Credits; Amy Winehouse for the Lyrics, Google for the Images. Template is made by me.​
Last edited: Apr 26, 2020
Aesthetic, Relations, Development, Playlist, Relio, The Lions, Relio Playlist, Interview

Expected is Expectancy
Expected is Friendship
Expectancy is Inevitable
isnt that enough.
​
Limitations
Limitations are a process
they cause more harm than good
expecting easy places
for those misunderstood.

Limitations offer complacency
in a world full of extremes.

So don't put limitations on your dreams.

Abiding by your limits
playing through your fears
allows the term uncertainty
to grace your ears.

Be your limits sage

The process of your dreams
shows a lot of faith

Let that faith be you
Let you protect your faith

Limitations are a process
they cause more harm than good