Lucas had been enjoying being back at Hogwarts, and decided to take advantage of the lack of homework at the start of the semester by exploring his favorite parts of the castle. He'd always liked the second floor corridor a lot, as it was filled with many magical portraits that moved and chatted. He still remembered his first impression of the moving paintings and how he had felt like he was dreaming. It brought a smile to his face every time. Lucas looked at the prefect's common room door curiously as he passed it, wondering what sort of secrets were kept in there. But he walked on, planning on going up a floor to look at the trophies in the trophy room next. 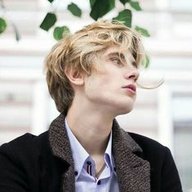 Casper was panicking. He couldn't be right- he couldn't- but it was just getting so hard to ignore. He had to speak to someone, but he didn't know who. Not the twins, not Augustus or Stanis, they were too close to this. He was tempted to reach out to Asher, but Asher was always so busy. Would he really have time to listen to Casper struggling to explain himself? Besides, Cas couldn't just write a letter. His parents might find it. Or might get Casper's reply instead of him. He couldn't risk it.

He was hiding in the abandoned classroom, pacing, shaking and nervous. He froze when he heard footsteps in the hall, and quickly and quietly snuck over, cracking open the door just a smidgen to peek out into the hall. Casper's eyes widened as he saw Lucas, and without thinking Casper threw open the door and stepped out, grabbing onto Lucas's hand and yanking him into the classroom with Casper. Once they were both inside, Casper peeked out into the hall to make sure no one had seen him before quietly and quickly shutting the door. He pulled out his wand, and both locked the door and after a few attempts managed to cast the silencing charm. He had to talk to Lucas, he knew he did, but he couldn't let anyone else know anything. Not yet. Maybe not ever.

Thank you Daph!
Show hidden low quality content
You must log in or register to reply here.