Open after Sophie posts with Ben

Hanging out in bathrooms wasn't exactly what Sydney had imagined her start at Hogwarts would include, but she had to admit the old run-down restroom had a certain charm. It hadn't been used in years, and she was bolstered by the fact that no one would probably bother her in here. She had heard from a few older students that ghosts sometimes hung out in here too, which was an interruption she certainly wouldn't mind. Talking to a ghost had to infinitely more interesting than talking to some of her classmates. Sydney frowned at the thought of some of the other kids in her year, returning to the task at hand. The privacy of the bathroom was also beneficial in that she probably wouldn't be interrupted while she worked on her revenge plot for that stupid Eric Holland and his dumb friend.
Sydney had her charms book tucked against her knees, wand flicking impatiently at the phrase "Eric SUCKS" she'd scrawled on the wall next to her. 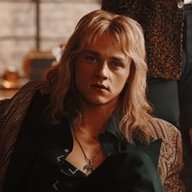 Ben was lost. He'd been looking for his common room for nearly an hour when he found a door. It didn't look like the common room door, but he was starting to get desperate and worried. What if he never found it and was stuck wandering the halls forever? He pushed open the door to reveal a sorry looking bathroom - and a girl.

Out of character: sorry I took so long to reply

Sydney looked up when the door swung open, unthinkingly clenching her wand in response. She couldn't tell if she was more relieved or annoyed when it turned out to be just another kid in the doorway, probably another first year judging by the lost look on his face. After a brief debate over whether to hide her new bathroom graffiti or not, Sydney eventually decided against it. If this kid decided to snitch on her, she'd deal with it. "What are you doing in here?" She asked cautiously. She'd already come to think of this place as "Her Spot" and wasn't looking forward to share it with any interlopers.