Closed A Secret Cry For Help

Lauren had been up all night, doubting what she had to do. She had send Aonghas an messenge an urgent one. It was now or never and she felt the time ticking. Never she had been so scared of going home. Gabriella wasn't there anymore, so all the attention went to her. Something where she would be happy about if it were positive things, but it was all negative. And she didn't knew if she would ever get to see Aonghas, and this castle. If her parents heard how she did it here on school. So far she was glad no one had ever spoken about her other than Professor Styx. She avoided that man for a reason and actually waited for the time her head of house would come for her. Everytime she saw her head of house walking by she hold her breath to see if he came for her. But so far nothing happend gladly. Lauren would want to tell Aonghas about her situation in a place that was not busy. No one could hear this. So when she walked in she checked if no one was inside and that needed to stay that way.

The blonde went sitting on the ground for a moment. Looking at her hands, was she doing good at this? Was it selfish to tell him about her home situation? What if she brought Aonghas in danger. She had no idea what her father would do. If Aonghas would tell someone else, she would never trust anyone again. So she had to let him promise to not tell anyone. She hoped she made the right decision. Lauren felt her hands shaking, nervous for the moment. But she deep down needed help, and was desperate. And adults she did not trust, so if her best friend knew of her situation perhaps that ment something. The blonde kept looking at the door waiting to it be opened and Aonghas to come in.

Aonghas had received an urgent message from Lauren, he had both been hopeful to get one and a little worried. He had known, figured that something was going on with Lauren for a while but hadn’t either been sure what to do or if he really should push it. But, he was glad that she had reached out now and he would be able to do something, help if necessary, he wouldn’t stop himself from beginning her home with him if necessary, his parents be damned. They shouldn’t mind it really. Not when he was engaged to someone. This was just a friend in need and him using the resources they had an abundance of to help out. He had gotten out of bed and headed to where she was, he felt nervous about it, nervous about what would come from it, how he would manage it. He sighed a little and reached where she was. He stood outside the door for a moment and then after finding a little courage he walked in, ”Hey Lauren,” he said softly. As he spotted her, which wasn’t hard, they were the only ones in the room. ”Are you okay?” he started by asking, thinking the was a good way to start out. Just ask her how she was. Then she could tell him all about what was going on.​ 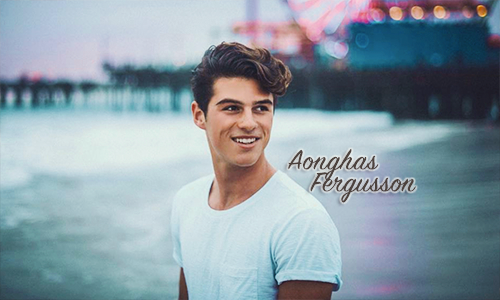 The blonde watched her hands hoping the shaking would be less soon. Her whole body just could not hide the fact anymore, that she was hiding something. At the start of this year the blonde had been giving up pretending, but she fell back in old patterns easily. The light in her life was that she joined the quidditch team and actually was a part of the team now. The beater position also made her deal with her anger a bit, it was good to hit something. In this case the bludger, better than a person. Lauren looked at the door and it took long, perhaps Aonghas would not come. He was a lot with some other girl from Ravenclaw, she didn't knew her name but he was sure in love with her or something. And that was fine, Lauren had pushed him away as her friend and she was glad they were doing better now. At least they talked to eachother.

Lauren saw the door opening and Aonghas coming inside slowly. She sat on the cold floor, but that didn't mattered. She looked a moment again around to check of they were really alone and than spoke. '' Hey.'' she said soft. She hold her hands and looked at the floor for a moment. Was she ok? Well that was a big question to be answered, and mostly she would say yes. She would lie about everything, but she was here to tell him the truth. '' I'm glad you came. '' Lauren than started off and looked at Aonghas again. She than gestured that he could sit next to her or across her, what he wanted. She ignored the question and just went talking with a lot of pauses in between. '' You are my only friend. Someone I.. think I trust. That's why I wanted to talk to you. About something.. '' Lauren already felt she was gonna take the time to get to the point. But she still had some doubt, she trusted Aonghas she believed. But this would be the ultimate test. '' But you have to promise me. You won't tell ANYONE.'' The blonde than said as she looked him in the eye. She could go back still and tell a lie.

Aonghas looked at her as she was sat on the floor, he noted that she motioned to the area next to her for him to sit but he hesitated for a moment. He looked towards it and then just nodded, seemingly finding his feet and going to sit down next to her. He knew in his mind that his problems, his family issues were nothing in comparison to hers, that where he was struggling with his family because purebloods had problems, he always got the impression that to Lauren they would be childish. He nodded at her words, he was warmed by the fact that she trusted him, that she was his friend, he wanted her to trust him, he wanted to help her. What use was all the status and power if he couldn’t do some good with it. He might sign his life away to the family and the family cause but if he couldn’t do a little something with it, then what good was it. Aonghas sighed as she asked him to not tell anyone. He looked at her, really found himself looking at her. Looking for anything in her expression that would give away what she was feeling, where the truth lay. She really didn’t want him to tell anyone, but how was he supposed to help her. However, perhaps this was a good first step, telling him then he could persuade her, maybe he could help her without actually telling anyone. Perhaps that would be the thing to do here. So he nodded, ”Ah promise Lauren,” he told her. He would need to promise this now, and then after he could deal with whatever it was and what his promise had actually meant. ​

Lauren watched Aonghas and she just hoped she didn't made a mistake. He went sitting next to her but she couldn't noticed he seemed a bit nervous or something in that way too. But perhaps that was her fault, she made this so secret ofcourse. But it was, and it was neccesary to be so secret. So the blonde sighted for a moment heavy. He stayed silent for a while, it seemed like he had to think of his answer and that made Lauren insecure. She could trust him right? He just looked at her and she looked at him, and she wished she could read his mind now like Styx had done hers. But than he answered, that he promised. He did, and that ment something. But Lauren wanted to make very sure he did. '' You said it. And you have to mean it. If you break your promise...'' The blonde than said and she could not help but talk a bit like her father it scared her. She didn't want to treaten him. '' I will never speak to you again. It's for your own best interest you will shut your mouth.'' The blonde than said a bit more serious. Though she hoped she didn't hurted him, but he had to know how serious it was. Lauren was so scared that she would follow into her fathers path when she grew older. They always told her she was so different, but she hoped she would actually be. Lauren also doubted of writing Gabriella. But it should be the other way around, she had to write her.