Pippa Majors Had decided after a heart break of what she considered to be epic proportions, that she was not going to allow herself to be hurt any longer. Spending the rest of the summer in the UK pouring over makeup tutorials, dying and cutting her hair, and buying an almost whole new wardrobe, the now dark haired Puff felt like she was ready to take on the world. After all, she had decided that with her new edgy appearance, came a new, edgy personality.

Step one was her resting witch pace, a slight pout on her lower lip. Then of course she had practiced rolling her eyes, and lastly, she had made sure that all of her shoes were traded for heels - which she was slightly clumsy in. The Hufflepuff didn't let that stop her from strutting into the Entrance hall like she owned the place, and finding somewhere very public to read - attempting to attract attention. Whether she made new friends, or perhaps even broke someone's heart - she knew this year she had to be much stronger than she had been. After all, she wasn't about to be hurt by someone like nasty Chaser again. 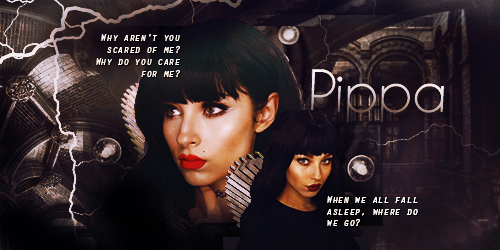 Magdalena was still fuming after what had happened over the holidays. At least Linnux had seemed to understand, but that didn't mean Maggie was going to pretend everything was back to normal. She was also still a little wary about Pippa, given the last time she'd spoken was the day she'd told Chaser how she felt. The fifth year had always supported her crush, but since having never realised it was her own brother Pippa had been referring to, it had come as quite a shock to find out. Despite the temperatures warming, Maggie was still dressed in black jeans and an oversized knitted black jumper with platform heeled ankle boots. Like her best friend, she hadn't worn these much at all but after getting them in the sales over the holidays felt like giving it a try. She had clopped her way down to the Great Hall but stopped outside it when she spotted the face of her best friend. "What happened to your hair?" she asked her in confusion. It actually suited her very well, but it was a large constrast to her usual blonde long locks. In fact her whole style seemed to have changed as she looked the girl up and down. Perhaps getting over Chaser would have been a step she needed to try out something new.