Months had gone by since Grakul's imprisonment.
Months.
He had stopped writing to Larissa and the Dementors had finally got to him.
Grakul sat on the cold, stone floor of his cell in Azkaban, rocking back and forth.
He clung to his hair, ripping at it.
"No.. No, they can't do this to me. I'm an innocent man! I'm innocent I tell you!" He cried out the echoes of his mind.
Madness.
"You can't.. No.. Wait.. I.. Larissa!" And then he began screaming, reaching out for his step-daughter who stood in the cell before his very eyes.
"I've missed you so much.. Come home to me.. Protest my innocence.. We can run away from your mother if you like.. Better still- we can kill her." He smiled at the ghostly figure but the little sanity left told him that she was not there, that he was still rotting in that jail.
The dark mark on his arm was surrounded by red marks where he had tried to scratch it away. 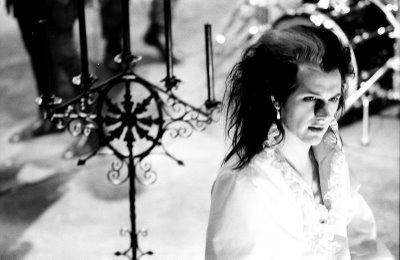 Four months later..
Grakul rocked back and forth in on corner of his cell. His eyes were grey, the hair on his face had grown further and his clothes were tatty rags. He just stared at the opposing wall. His mind was no longer with him; now it was in another land- another world.
Grakul had not been allowed to write letters after incident which could have caused a lot of issues.
So now he was all alone. All by himself and rotting in Azkaban. There's was no way he could get out now.. Was there?
But Grakul wasn't truly capable of thought.
The empty shell of a man simply sat and stared. Sat and waited for his mind to rot away.
That was, until the mark began contorting on his wrist. Grakul felt it and rested a hand on it. He could feel the skin twitching beneath his fingers. And he smiled. No, he didn't just smile, Grakul laughed. Laughed hard. Manical, twisted, haunting laughter.
It was only a matter of time.
Things Have Finally Changed
In My Mind..
-----------------

For more than a year and a half, the man had rotted away in Azkaban, regretting the trust he had had in his ex-wife. She had meant so much to him, as had her children.. Especially Larissa. Larissa had become like his own daughter and he had loved her like a father. But now, all that had been taken away. Now he was stuck in here, probably for the rest of his life. He could try to escape but that would be pointless. If only he had help from the outside.. But he knew nobody he could trust. Alright, he had known a few fellow Death Eaters but one of them, if he remembered correctly, had also been hauled into Azkaban. Their numbers were falling.. Fast. Grakul had been allowed to read the Daily Prophet and, from what he had seen, hope was lost. The Death Eaters were being silence and fading away. Grakul stroked the heavy brown beard on his chin, the silver hairs were more visible now that his hair had become long and matted. He may have lost most of his sanity but the part he still had was only held there by one thought.. The thought of being re-united with Larissa once again.
Things Have Finally Changed
In My Mind..
-----------------