Sexual Orientation
too busy to bother

Minnie had left the yuleball after her fight with Blake and the subsequent fall out of it. Her hand was sore but she didn’t exactly want to go where Blake was at the hospital wing, she didn't really want to face him again, the dorm was out, she couldn't face the other girls. She was trying her best to not give it a lot of thought, the whole fight and fall out, people were bound to have noticed it, and she couldn’t help but think this was her final fall from grace. She had a detention after the summer break. Minnie knew it was deserved, she probably shouldn’t have hit him, but it had felt right in the moment and even with consequences she faced and the likelihood of further consequences if her parents ever found out about the detention. She didn’t regret it. Minnie hoped that the consequences that Blake had gotten for his words would help him realise how wrong they were, truly the people she felt worst for were the girls on his team, the team as a whole. They were such a strong team and he was diminishing their victory. ​
​
Instead of going to the hospital wing for an ice pack for her hand, or some bruise paste she went to the kitchens. She had never been in the kitchens really, it wasn't a place she was supposed to be, but she had good reason today, and she already had one detention, for a night she could try to care less about getting into trouble. The kitchens were bustling when Minnie walked in, she moved between the elves till she was sat down at a table, only then did she ask a house elf to bring her an ice pack, or just something freezing for her hand and cloth. Minnie felt out of place in amongst the elves, her dress, how much effort she had put into this night, but it had gone so disastrously. As she watched the elves she consider if it was maybe time to get a job, she’d always been told to not because it would interfere with her studies but with her parents how they were and how they would react if they found out about the detention, she’d maybe need money. Minnie thanked a house elf as it brought her what she’d asked for and Minnie placed the towel wrapped ice pack on her bruised hand and just let herself continue watch the house elves. She had known this night would go poorly, but it had gone worse than even she could’ve imagined but with her luck this year of course that would happen. ​
Biography | Relationships | aesthetic​ 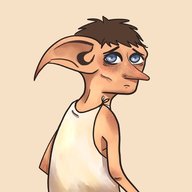 It was an especially busy day for the house elves; it was the yule ball. While many of the house elves were tasked to work upstairs, Lelo and some of the others were working downstairs, preparing more treats for students. He carried a big sack of potatoes, and was decently surprised to see a student. They didn't get many visitors during this time. She asked Lelo to bring her an ice pack, and so he scurried off and brought her an ice pack wrapped in a towel. The girl looked sad or mad, or something in between. Lelo couldn't really tell.
avatar drawn by me, myself, and I