The Oak and the Willow Tree

What in the seven hells was he doing, here? Araxfell stared up at his own apartment ceiling, contemplating his life choices and the woman who'd taken over his bathroom half an hour ago, leaving him chilly and confused under the sheets for what must have been the hundredth time these last few years. Hela had turned his life inside-out, no doubt about that, from the moment she'd kissed him in front of Matthew Cosgrove in the middle of Bleak Street before she'd even known his name. They'd had one drink, one, and she had found out his blood status directly (who even asked about that anymore?) before she was turning up at all hours, somehow managing to be available whenever he wasn't working. More than once he'd unlocked his front door to find her already waiting for him inside. He couldn't take much more of this.

Consequently, the engagement ring he'd acquired was hiding in his sock drawer, and had been for the last twelve days. Hela had come and gone more than once during that time, and every time he'd waited till she was in another room to fret and turn it over and over in his hands before putting it back in the sock drawer. Arax wasn't generally an indecisive person, but it was difficult to tell since he wasn't entirely sure if he was under the influence of a part-veela (he wouldn't have been surprised), cursed, or simply insane. In fact, he was up right now and doing it again, staring at the ring in the open box until the sparkling diamonds began to hurt his eyes.
Araxfell looked up, directly into a part of equally sparkling eyes, and he shut the box with a snap and banished it to the sock drawer with a hand movement. "Hela!" exclaimed the Dane. "You are finished?" Stupid, yes obviously she is finished- now go and put some trousers on, he told himself.​
H

Hela Zhefarovich was a demanding woman. She learned to get what she wanted, when she wanted, by her mother. Well, adopted mother, biological aunt. Ever since she found out about Araxfells blood status, she could not resist. The mans whose lips were so soft, delicious even. And her extracurricular activities with him were exciting too. Hela ran her fingers through her blonde hair as she showered. Her showering items filled the bathroom for a while now. Hela was certainly impressed with her skills, having landed the perfect man. Some might try to argue with her, but Rayna certainly improved of how Hela described him. Even if Araxfell managed to tell her to get lost, she doubt she would listen. All she had to do was take off her jacket, and draw him back into her web. Hela rinsed the conditioner out of her hair and started to lather up. She had to remain clean. It was often that she showered twice a day. Just because she adored it that much. Perhaps it was the water, or the feeling of washing the sins away

Hela turned off the shower as the last bit of soap was gone. She stepped out of the shower, and dried off her hair using her wand as a hair dryer. Thank goodness for magic. She put her a flowy shirt back on, as well as her pants, throwing a set of shimmery purple robes over her outfit. Hela stepped out of the bathroom and into the bedroom, seeing what Araxfell was doing. Her silver eyes narrowed slightly, as a smile crossed her thin lips. Of course, dear. Hela crossed the room as her eyes rested on the sock drawer. What were you doing, Araxfell? The Zhefarovich lady was very curious to what he was doing next to the sock drawer. Dressed or not, she desired to know.
​ 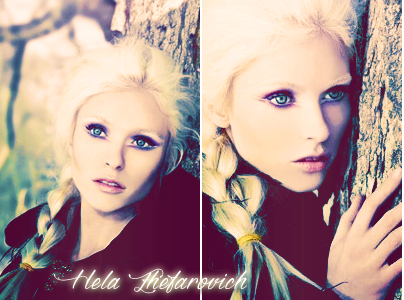