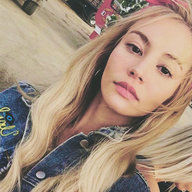 Signy wasn't often just wondering around, but today she was. Having little to do in the beginning of the semester was certainly wearing her down. She wanted to spend time with Xavier but hadn't yet managed to find him about the place. So, she was just trying to find something else to do. People to spend time with, a place to hang out, really just anything that would be fun or remotely interesting. The teen was walking around, being a third year meant there wasn't much she hadn't already seen or experienced at the school, so finding something to do that she hadn't already done was near impossible. So just finding anything to do was the next best step. The girl smiled to herself as she made her way on to the third floor and entered the trophy room. This wasn't a place she ever thought she'd end up. It was filled with people who just worked better than she did. But, it was nice to imagine she might end up on at least one of them, maybe just for a halloween costume, but she wouldn't mind. Signy was so engrossed in staring at the walls as she moved about the room that she didn't notice the bag on the floor. The hufflepuff trip causing many of the other things in side the room to fall with a loud crash. Oh dear. She certainly had something to do now, clean up her own mess. Signy wasn't often clumsy, but it appeared that when she was, it definitely wasn't a good thing.
​
Biography | Relationships​

The trophy room wasn't part of the school Lizzie had really spent much time in. She wasn't a person who sought solitude or reflective thoughts often. She was unable to get her mind off Quidditch though, stressed about the cup, their final game weighing on her shoulders even though it was months away. Practice doing nothing to ease her thoughts, Lizzie decided maybe some research would. It would be nice to see when the last time Gryffindor had won the cup had been, to see the kind of legacy her house had. So she had made her way to the trophy room, dropping her bag idly on the floor as she went. No reason to be especially tidy while she was alone here.

Or so Lizzie thought, at least. She was caught up in her thoughts, searching the room for the Quidditch cup when she heard a loud crash, startling her into yelping. Looking over, Lizzie realised she hadn't been quite so alone, and her carelessness had sent another girl tumbling. "Sorry!" Lizzie said quickly, hurrying over to see if the girl was hurt. "Are you okay? I didn't think there was anyone around to trip over my stuff, sorry!"

Amy's holidays had been fun and she was grateful for the break, now she was back however she wanted to spend some time with her friends whom she hadn't seen since last semester. Amy rolled off her bed, not wanting to waste anymore time as her mind was set. She was going to find her friends and hopefully, they weren't busy doing their own thing - or worse, studying on a day like this. The Hufflepuff was walking along the third floor corridor having checked both floors below and so far nothing, not even her brother was anywhere to be seen. She passed the trophy room and wouldn't even have glanced at it had she not heard the loud thump from inside. Curious, Amy walked inside the room and her eyes widened, her mind already processing what had, probably, happened. "Is everything okay in here?" she spoke up, her eyebrow raised. It seemed as if the younger girl of the two tripped over the other girl's bag. Maybe if the girl was hurt they could take her to the hospital wing and clear the bags to one side so no one else would fall over.
Relationships​
<i></i>

Signy looked up when she heard a voice apologising, and noted that this must be the person who had left the bag there. She wasn't angry, things happen, and one can never know that such a thing would occur. The girl smiled with a friendly expression at her and shook her head, "It's okay, sh1t happens," Signy replied with a warmth in her tone, "And I'm fine, all good, no harm no foul," she was never going to blame this girl for leaving her bag around when it was just as much her own fault for not looking where she was going. That much was obviously true. A second voice sounded in the room, and Signy looked towards it, realising that it was a girl from her house, a prefect. She nodded at her, "Everything's fine, just tripped up and caused some trophies to fall, it's alright," the girl assured her. She looked at the mess that she had inadvertently created and sighed a little, "Just got a big clean up job now," she looked between them "I'm Signy by the way," she introduced to them both, seeing no reason to not be friendly and polite and introduce oneself to them. Signy knew however that she should cleaning up her mess and so crouched down and began picking up some of what had fallen.
​
Biography | Relationships​

Lizzie's embarrassment only grew when an older girl showed up. Oh no. This was completely her fault, and now she might even be in real trouble. Just great. "Sorry! This was totally my fault, I'm really sorry, I'll clean this up..." Lizzie ducked down to help the younger girl pick up the fallen trophies, feeling terrible about this whole ordeal. "I'm Lizzie."

Amy raised an eyebrow when the younger girl in her house said that all that had happened was a few trophies falling, but she shrugged and sent her a smile in reassurance that told her Amy didn't mind. Life happens. "All right," though before the blonde could say any more the older girl of the two noticed Amy's presence and went off on all sorts of apologies. "Oh, there's no need to apologise! I can help," she offered, since it seemed like the most sensible thing to do and Amy didn't want to make Signy and Lizzie, as they'd introduced themselves, feel more embarrassed or pressured to clean everything up by themselves. "I'm Amy. You two know some spells, right?" she asked them, otherwise she could teach it to them. It wouldn't take long if they used their wands.
Relationships​
<i></i>

Signy knew it wasnt this girl, Lizzies fault. Signy shouldve been paying attention to where shed been walking, then she wouldnt have tripped up, she wouldnt have caused everything to fall, and thus for an older girl to come join her as she attempted to clean up the mess. However, she just looked between them as they both offered to help out. She was warmed by it, it was a nice gesture from both, though Signy wouldve been happy cleaning it all up herself. Her gaze shifted to Amy and shrugged a little, she knew some spells, of course, but she wasnt sure what spells would help with this, What spells would help us here? the girl asked with a curious air, she was always up for learning more really, and if it helped her school work overall, she really wasnt going to complain about it, learning new spells was always fun. I didnt even think about doing magic here to try to do anything, so thats some good thinking, she complimented the girl.
​
Biography | Relationships​

Lizzie already had an armful of trophies when Amy mentioned spells. Oh. Of course... Lizzie laughed a little at herself and set the trophies back down. "Whoops. Forgot about magic for a moment." She laughed, drawing her wand. "I reckon Locomotor would be the easiest way to move them all back, right?" She looked at the older girl for confirmation. Lizzie wasn't the best student, but she remembered watching mum put things away and tidy up after guests at the lodge, and it seemed to be the quickest option she could think of.