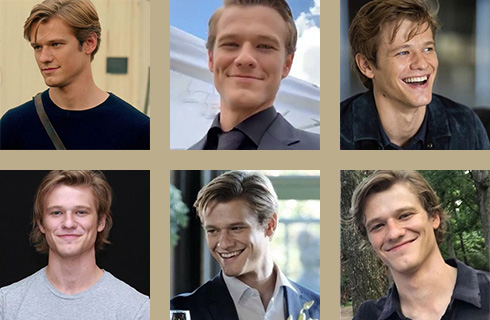 Leif is of Scandinavian origin, and the meaning of is "heir; loved". According to Norse legend, the Viking Leif Ericson landed his longboat on American shores some 500 years before Columbus arrived -- Aleksander as a name for boys is of Greek derivation, and the meaning of the name Aleksander is "man's defender, warrior" -- Ødegard is a family name of Scandinavian origin meaning "deserted farm".​
PRONUNCIATION

Leif's first name was easily decided on because it is a family name. It was his grandfathers name, his uncle's name, his father's middle name and it was only appropriate that it would be his name as well. The name Aleksander was chosen by his parents as a reminder that it is always good to stand up for others and help others when you can​
NICKNAMES

Because his name is already short it isn't one to be easily turned into a nickname, His father used to call him 'champion' or 'champ' when he was younger and still does on occasion.​
BLOOD STATUS

Leif is a Half-Blood wizard, his father is a muggle whilst his mother is a witch.​
ROOTS

He is 100% Norwegian. Both his parents' families have their roots buried deep into Norwegian history. It's something he's definitely proud of.​
PREVIOUS RESIDENCE(S)

Leif lives in a small apartment in the wizarding community of Wellington. ​
WAND

Aries. As the first sign in the zodiac, the presence of Aries always marks the beginning of something energetic and turbulent. They are continuously looking for dynamic, speed and competition, always being the first in everything - from work to social gatherings. Thanks to its ruling planet Mars and the fact it belongs to the element of Fire, Aries is one of the most active zodiac signs. It is in their nature to take action, sometimes before they think about it well. Their challenges show when they get impatient, aggressive and vent anger pointing it to other people. Strong personalities born under this sign have a task to fight for their goals, embracing togetherness and teamwork through this incarnation. Aries rules the head and leads with the head, often literally walking head first, leaning forwards for speed and focus. Its representatives are naturally brave and rarely afraid of trial and risk. They possess youthful strength and energy, regardless of their age and quickly perform any given tasks.​
HOUSE ASTROLOGY

Hufflepuff Aries. Hufflepuff Aries have an extreme abundance of energy; however, the usual Hufflepuff tendency to work hard out of duty is modified by the Aries tendency to value play over work. Therefore, expect long periods of playfulness and seeming indolence punctuated by brief, manic bursts of industry. These Hufflepuffs may also be more ambitious and socially aggressive than average, making them clear leaders in their House. Their emotional warmth, open hearts, madcap sense of humour, and quirky independence will endear them to many people, but their naivety makes for easy exploitation by more ruthless sorts of people. ​
ELEMENT

Fire. The Fire element is masculine or yang, and is active and outer expressive in its basic nature. It corresponds with the Jungian typology of Intuition. Fire is a radiant form of energy that brings light to the world around it, enthusiastic and excitable, self-oriented, impatient and essentially optimistic. It is represented in the signs of Aries, Leo and Sagittarius. Fire people are honest to a fault, freedom loving and often insist on their own point of view. They live in the idealism of great thoughts and deeds.​
PLANET

Mars. Mars is the planet of outward activity and animal passion. It rules Aries and is exalted in Capricorn. This fiery planet is masculine in action, versus softer more receptive Venus. When strong in the chart it can indicate a volatile temper, and also great courage. Its position indicates how your personality will assert itself, and what modes of activity will stimulate your physical energies.​

Somewhere between golden platinum and light ash blonde. His hair gets a few shades lighter in summer. He doesn't have one specific hairstyle that he likes, although he'll never let it grow too long. ​
EYES

Leif has baby blue eyes, a trait he shares mostly with his mothers side of the family. His eyes are often one of the first things people notice about him. ​
BUILD

Leif has quite an athletic build, because he has been playing ice hockey since he was young. After their move to New Zealand he unfortunately had to quit, but kept up with other sports.​
VOICE

He has a pleasant voice with a that used to be laced with a Norwegian accent, but over time English has pretty much become his main language and his accent got lost.​
DISTINGUISHING FEATURES

A couple of scars from times he fell or got hit whilst playing ice hockey when he was younger. The things that are most noticeable about him are his smile and his eyes. Leif has this big goofy smile and beautiful blue eyes. ​
LANGUAGES

Leif is fluent in Norwegian and isn't unknown to other Scandinavian languages. His English is good and over time he has fully lost his Norwegian accent. ​
DOMINANT HAND

He is right handed, his sister tried to teach him how to write with left as well but he never quite got the hang of it. ​
ALLERGIES

Leif doesn't have any allergies that he or his family are aware of.​

Charismatic. Confident in a positive way, appealing to others.​
Protective. Strong desire to take care of and look after others.​
Confident. Feeling or showing confidence/certainty about oneself or one's abilities and qualities.​
Born leader. Displaying characteristics and character traits of a leader.​
Athletic. Physically strong, fit and active.​
OVERALL PERSONALITY

Leif is an extremely charismatic person, always has been. He is kind, friendly and caring. He is a social person and loves to interact with others, often wanting to help them. He cares a lot about people and would always want what's best for them. Leif can get protective over his friends and family, but also over complete strangers if he notices they are in trouble. He's a confident guy both in his looks as well as in his actions. Leif can be a bit stubborn from time to time. He is also highly athletic, loving to keep moving and stay fit which might just be because it kept some sort of structure in his life when he was struggling with everything else. ​
STRENGTHS

Leif is a very charismatic person, he's an easy talker and loves meeting new people. He's also confident in himself. He loves to learn Leif also has a strong sense of leadership. ​
WEAKNESSES

One of Leif's weaknesses is that he can be slightly impatient. He can also get a bit too overprotective at times. ​
PATRONUS

Buffalo. Sacrifice, wisdom. The buffalo is an intense symbol of life and abundance. Buffalo people are often wise leaders, good providers and gentle in nature but firm in resolve. ​
ERISED

When he was younger Leif would see himself as a professional ice hockey player. However, as he grew up things changed. At one point near the end of his time at school he would just see himself be happy , not struggling anymore, and that has stuck ever since.​
AMORTENTIA

He would smell pine trees, lemon and Norwegian's national flower the purple heather. ​

Therese Rosenberg (although he doesn't know if they're still friends since he hasn't seen her since their breakup).​
FIRST CRUSH

Therese Rosenberg - Therese was Leif's best friend and they started dating somewhere halfway through their time at Hogwarts. The couple broke up some time after graduation, not knowing whether they would continue to work and thus deciding to end things. ​
CURRENT RELATIONSHIP

He had been hurt by the breakup so he took some time to figure things out and get his life together, which has been good for him.​

Leif was sorted into Hufflepuff.​
THOUGHTS

He was happy to be sorted into Hufflepuff because that meant he would be in the same house as his sister. Leif has always enjoyed being a Hufflepuff and wouldn't have traded it for anything in the world. ​
SORTING POST

Leif looks up to his father a lot, as he is a role model to both him and his older sister. He admires tha fact that he always makes time for them, even though he's a busy man, and he just has a strong bond with his father as he is his only son.​
MOTHER

Whilst his mother has been his teacher as well as his sisters, she always seemed to be a lot nicer to Leif than she used to be towards Freya. Leif doesn't dislike her, but he has a strong bond with his sister and hates that his mother gave her such a hard time. ​
SISTER

Ever since the Odegard's moved to New Zealand the bond between these two siblings started to grow stronger. They got even more close when they both attended hogwarts. Leif had been ecstatic to be sorted into the same house as his sister. After graduation Freya was a huge help to Leif and he couldn't (and wouldn't want to) imagine what his life would've been like without his sister. ​

Leif was born in Fredrikstad, Norway. He was the second child and last child his parents had. When Leif was young his father wasn't as busy as he later got to be and would often take Leif to ice hockey games, being his biggest supporter when the kid decided he wanted to play himself as well. They were mainly a happy little family, although the tension between his mother and sister has always been present. After Leif's father got promoted he got reposted and their family had to move out of Norway and into New Zealand. Leif and his sister never went to school but rather got homeschooled by their mother. Asides from the kids he used to play hockey with Leif never had much friends as a kid, which is why he was so excited when he was finally able to attend Hogwarts so he could go to a real school and make tons of new friends.​
​