Isadora had found an old, small, green ball outside on the grounds and taken it with her. Apparently, it was called a tennis ball and used for some sort of muggle sport, but to Isadora it seemed perfect for throwing and catching. So that was what she had been doing all afternoon in the common room. She had been tossing the green ball into the air with one hand, only to catch it with that same hand. At first, it had bounced off quite a few times, to the annoyance of older students trying to study in the common room, but eventually, she managed to catch it almost every time. She was eager to show her friends her new trick, so she left the common room in search of Margo, Cameron, or Kiara. Whoever she could find, really. But as she walked with the ball in her hand, she got the urge to throw it again. She realized that doing the same trick while walking was probably even more impressive, so she started tossing the ball into the air and catching it as she moved through the corridor. She was doing pretty well until she accidentally tossed the ball a bit too far for her to catch it. She could only watch as it soared out of her reach and landed on the head of an unfamiliar boy. Isadora's hands flew to her mouth, but it didn't quite hide her giggle. "Oops, sorry." 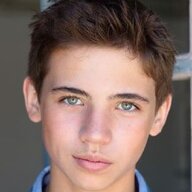 Axel was heading for the steps to go down to the Brotherhood room with two books, one that he kept school work in and one that was more like a journal. He never wrote anything too personal in it though. The young boy wasn't paying much attention to anyone as he moved, at least not until he felt a bop on the head which made him drop his books. His hand went out almost instinctively, a green ball landing in it. The Ravenclaw rubbed the top of his head as he turned around, spotting a girl giggling. It was almost sort of funny now that he thought about it and a grin crossed his face. "I'm guessing this is yours?" he held out the ball to hand it over before he'd pick up his books.

Isadora couldn't quite hide her grin as the boy approached her, that had been pretty funny. Thankfully, he seemed to agree. "Yeah, sorry." She said, taking the ball before crouching down and helping him gather his things. "I promise I wasn't aiming for you. I guess I won't be scouted by the Gryffindor Quidditch team as a chaser anytime soon." She joked, picking up a book he had dropped.

Axel let out a snort at her comment. "Maybe" he added. He as new to quidditch himself so he didn't know any of the players too well. Axel bent down as well to pick up the other book and then stood, waiting for her to hand over the book she'd picked up. "What were you up to anyway?" he asked, wondering what she was doing now that he knew what she wasn't doing.

Isadora handed the boy his book with an apologetic smile. He asked her what she had been up to, and she shrugged. "Practicing." She admitted. "I found this muggle sports ball and I've been practicing throwing and catching it with one hand." She then paused. "I was bored." She added.

"Too bad it doesn't do much else" he added. If it was charmed or a magical ball of some kind, it would be more fun. He was certain of it. Axel tucked both books under his arm. "Are you muggle-born then?" Axel asked with great curiosity.

Isadora shrugged. "Guess not, but it's easier to take with you than a quaffle or something." She said lightly. Isadora shook her head at his question, feeling a bit strange. She didn't think there was necessarily anything wrong with being muggle-born, but it still felt sort of insulting to be called one. She could only imagine her mother's reaction. "No, kind of the opposite." She said with a shrug.

Axel chuckled. "I guess that's true" he stated, trying to imagine stuffing a quaffle into a regular backpack. If it was enchanted, it would fit in pretty easily but it would be pretty downright noticeable in a regular one. Axel nodded. "I'm kind of the opposite too" he smiled, shifting his books enough to stick his hand out again, this time for a handshake. "Axel... Zhefarovich" he stated proudly. He was named after his grandad and was pretty proud of that.

Isadora wasn't sure what she expected the kid to say, but she wasn't expecting him to say he was the same as her. She blinked as he introduced himself, looking at him warily for a bit. "Really?" She asked, taking it in for a moment. She finally shook his hand, still looking wary. "I guess that would make some people think you're a pretty big deal." She said, noting the pride in his voice. She made a point of looking unimpressed. "I'm Isadora Novak." She added, not putting as much emphasis on her own last name.

Axel shrugged. He didn't think he was a big deal, not yet anyway. But his family was a pretty bit one and had some notoriety. He listened as she introduced herself, the name striking a note of recognition within him. He couldn't remember from where initially. It was bothering him and he remained silent for far longer than he should have when it hit him. His mother had told him the name. "I know you" he blurted out. "Well, no I don't. But my mom told me to look for you. Said your mom was nice..." he added, growing increasingly more awkward.

Apologies for being late with this reply!

Isadora wondered if Axel Zhefarovich would know about her family, but saw the recognition on his face before he even spoke. The pureblood community wasn't very big, and her other had been trying very hard to network and make their name more relevant again. She sighed softly. "Well, I don't need you to look out for me or be my friend because your mum said so." She said, frowning slightly. "I can make my own friends, you know."

Axel listened to her and then shrugged. It wasn't as if he'd sought her out. They'd just bumped into each other. She seemed pretty friendly, so he figured she really was fine making friends on her own. "OK, that's fine with me" he stated. "Just...if one of our moms asks, can you say I did help?" he asked. He knew it would make his mom happy to know he'd helped another pureblood family's daughter. She didn't have to know it wasn't the truth.

Isadora had half-expected the guy to argue or tell her she was wrong, but he was pretty chill about her saying she didn't need him to be her friend. Annoyingly, that made her like him a bit more. "Sure." She said when the boy asked if she could lie if their mums asked. "As long as you tell them I was polite to you." She added as an afterthought.

Axel didn't even have to think about it. "Deal" he stated, holding his hand out so they could shake on it. This was really the best case scenario. He could tell his mother that he'd helped the pureblood girl and not really have to do any work towards it. His mom would be happy, and it seemed that both he and Isadora would be happier for not being forced to spend any amount of time together. This was a win win.
Show hidden low quality content
You must log in or register to reply here.