Ithica Reinhardt had made it through her first term at Hogwarts and felt decidedly fine about it. She hadn't gone out of her way to make friends per se, she chatted with those from her house more than any other really but she hadn't found any particular company other than the odd one or two that she really genuinely liked hanging out with. In truth she wasn't much of a 'hanging out' with person, she didn't like being sedentary, she didn't like simply sitting and reading for hours as she saw others do. Her entire being felt always too restless and as she had wanted to stay at the castle for the Yule break, she had taken herself off to walk about the grounds.

She had already explored the lake, the garden, parts of the school, the edge of the forbidden forest and was not at all tempted about going into it the way other students seemed to be. She marveled at how her peers would hear the word 'forbidden' and immediately they would want to pursue it. Ithica had a healthy sense of her own mortality, had no compulsion to put herself in danger or harms way and so, stayed well away from any place or anyone that would upset her equilibrium. Finding herself out on the cliffs therefore had not been a plan of hers at all, she had merely come out for yet another walk.

The view was beautiful though and she felt compelled to walk near to the cliff edge as she stared out over the expanse of landscape that lay before her. It was glorious and that wasn't a word she used often, she was more known for her criticisms than anything complimentary - but this was glorious. Inhaling deeply she wrapped her arms about her waist, her long auburn hair blowing gently in the wind. She wouldn't go any closer, it scared her more than she would ever admit out loud to anyone but to herself, this type of crazy edge of the cliff stuff could be left up to the idiots that were Gryffindors and all their bravado.

Glancing about her from left to right, she grinned a little before inhaling again and then releasing the breath by shouting out "Queen of the World!" the words echoed in the distance and the sound made her feel extremely satisfied with herself, a smile spreading across her face as she glanced out over the cliff. 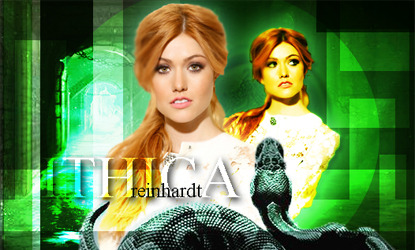 biography - work in progress
​
Show hidden low quality content
You must log in or register to reply here.