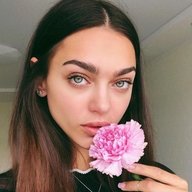 Personality:
A very loud personality, shes outgoing and bold. She can be very petty and she can be exceedingly extra. Shell go beyond what she needs to, needs things to be a certain way for her to be happy. Shes loving to her family, loyal to her friends, but hides a lot. Ashamed that her family are poor with very little money. She likes fancy things and pretends a lot to be fancier than she is.

Family:
Both her parents were born and raised in bulgaria until they moved to New Zealand early in their life together. They had moved to New Zealand for work, as part of a project they were involved with their work at the time, and eventually stayed in New Zealand permanently. Her mother was a low level film star in Bulgaria, but in New Zealand she works in a bar. Her father was a photographer in Bulgaria and now is a professional photographer in New Zealand. He works at muggle weddings and other such events, but his work doesnt bring in much money. They are both half bloods but neither were particularly focused on school, both dropping out before they could do their NEWTs, her parents also never married, but have been together since they were 15 years old. She is an only child, and very rarely visits her grandparents.

Area of Residence:
She was born in Dunedin, New Zealand. She has never visited Bulgaria, and doesnt speak any bulgarian, her parents thought it was more important that she speak english.

Blood Status:
Mixed blood, both her parents are half blood

Additional Skills:
She can fly a broom fairly well, she can also understand Bulgarian, she cant speak it, but she can understand it.

Strengths:
Shes independent, shes strong willed and out going. Shes a confident person, active and loyal to people. Shes unlikely to let anyone walk over her and shes very good at keep secrets. Shes good at sports and always works hard if shes good at something. Shes a polite person.

Weaknesses:
Shes ashamed in many ways of her family and their status. She can be very petty and doesnt let go of things easily. She can be very over the top and overly dramatic, she likes being the centre of attention. She is secretive and is unlikely to be as open with people as shed expect them to be with her.

Favourite place to be:
She likes being at school. Despite the fact she doesnt need to go being magical, her parents sent her because they couldnt have her staying home alone, or with a nanny or tutor. She likes school not because of what they are taught, in fact she doesnt like school for the whole lessons aspect but thoroughly enjoys being around others and being able to spend time with friends.

Friends:
Bisera has a lot of friends at muggle school. None of which she would class as best friends, but she has some close friends, whom she will miss upon leaving to go to magical school. She sits with a close group of friends and gossips about others. She is always happy to learn about others in her friend group but is often not one to talk about herself. She is hoping and is almost certain that all of her friends will deeply miss her.

Hogwarts House:
She has never really cared about this, but she thinks shed probably do well in Hufflepuff, despite the fact that she hasnt ever been hard working apart from with sports, she thinks that would be the easiest place to make friends and be able to get a close group of friends she could be the centre of it.

Hogwarts Hopes and Ambitions:
She would love to join the quidditch team, but mostly she just wants to leave school with a good group of friends and the ability to go into a job where she can make more money. She would be very inclined to spend her hogwarts years to find a partner with money where she can marry into

Best school subjects:
Currently its sports and it is likely to continue at school where shell do well in quidditch.

Worst school subjects:
Above all else, anything to do with history. She has no interest in the subject and therefore goes out of her way to avoid it.

Extracurricular Activities:
She hopes to take part in quidditch, but currently doesnt take part in anything.

Plans for your future:
She just wants friends really

Your Patronus:
Their patronus would likely be a colour parrot of some kind.

Your Patronus memory:
They would use her last birthday, not just because it was when she got her letter, but because her parents bought her a necklace made with real gold and it was the most expensive thing shed ever held that was real. She loves material things, but also loved that her parents would go out of their way for her to have this thing.

Your Boggart:
Any secret she holds being revealed

Your Animagus:
Six-plumed bird of paradise

Mirror of Erised:
Her family would be rich. They would have an abundance of wealth.
Development | Biography | Relationship​
Show hidden low quality content
You must log in or register to reply here.