There really wasn't much stopping an underhanded person from making underhanded deals with other underhanded people in Bleak Street. Calcifur hadn't seen an auror in this part of the alley since the post-You Know Who era. Technically he was still part of the post-You Know Who era. In fact, forever after would always remain slightly more special than usual as the shadow of the Dark Lord fell on no one but the worms. It was well starting to fade into the backs of people's minds, and Calcifur had only thought of it briefly to remark to himself about changes it had caused over the years: like the complete and gratifying absence of any form of law upholding here. Maybe the Pigs were getting lax, or maybe they couldn't be bothered with small-time crooks anymore since they'd already fried the biggest fish, but either way, it had been smooth sailing for the dark eyed wizard since early morning. Calcifur worked one of those 'behind the scenes' jobs that didn't do mentioning in polite company. He supplied the less legal substances and artifacts to the outwardly legal businesses and corporations in wizarding New Zealand, sometimes having to get rather steeped in violence to comply with the client's wishes. He was not, by nature, a violent man, but only by necessity when the going got irritating. So far things had gone rather smoothly, but one supplier was giving him hell in almost full view of the dirty, sinister public.

"I told you I'd have it by Monday!" blustered the wrinkly vendor. "It is Monday," interjected Calcifur wearily. A throbbing of intermingled pain and annoyance began beating at his left temple. The tall wizard glanced left and right to see what vagabonds were taking an interest in his endeavour, but most had deigned to keep their eyes on their own wares for fear of upsetting what they knew to be an unforgiving customer. The decrepit old man he was negotiating with was too loud and too deceptive for his liking. He could see what he required dangling 'hidden' beneath the vendor's cloak. No doubt he lied only to keep it for another offer, sold at a much higher price. "No, no, no, Monday the seventeenth-" said the vendor quickly as Calcifur took a calm step forward. Without any further provocation, the man whipped out a grubby old wand and aimed it jerkily at Calcifur's neck. He almost had to stand on tiptoes in order to lift his arm high enough. "Now just you clear off, Mudblood!" he croaked. "I'll not be selling it to you for under 15 galleons, and you can take yourself clean off to your employer and tell 'im so! Scum of the streets-". Calcifur made no response to the jibe about is blood heritage and listened almost patiently as the man squealed on. Abruptly enough was enough, and the street echoed with a crack as Calcifur punched the vendor full in the jaw. Down went the bag of bones, and the rest of the street hawkers suddenly had somewhere else to be very fast. Whimpering, the man clutched his jaw and cursed up at Calcifur, his wand forgotten. Calcifur's robes swept the sticky ground as he bent to remove the dangling package, cutting the attached string with a pocket knife. "My regards," said Calcifur, without a smile. The tall wizard stood to pocket his collectings when footsteps echoed up the winding cobblestones. Finally he glanced up to meet the intruder upon his little scene of woe, and he slipped both pocket knife and package into his robes, palming his wand into his hand in the same movement.​
K

Kuyumo and her sister Kita where here on less than savory business for sure. They where of course out on orders from the Company which, like it or not, was under direct influence of the Koshiba. Not that they had much to do with it. Kuyumo, for one was just in it to get paid and paid they did get. Today they where looking after shipment that was meant to come into one of the Koshiba owned stores with little or know interruptions from local authories. That's what the Katsunie twins did after all. Look after things or people. It required much less underhanded scams and more of mussel. They where doing this in fact to fund their schooling more than for the want of it but then in Wizarding Japan there where only two ways to make money, the honest way or the fast way and uni cost a lot more than the honest way could supply.

Kuyumo had been scanning the area for people that could make the transaction happening in the store difficult when she came across two common crooks having at it near the end of the street. Kuyumo had her wand half way out to help the man fighting when she saw him punch the old vendor to the ground. He collected his earnings and made his way past where Kuyumo was standing. "Bravo, stranger-sama didn't even have to draw his wand." She said leaning casually against the wall. Her long brown hair swept to one side as she beamed at the clearly older man. 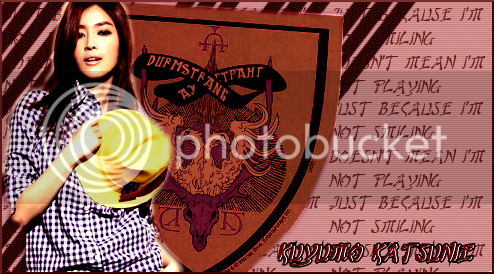 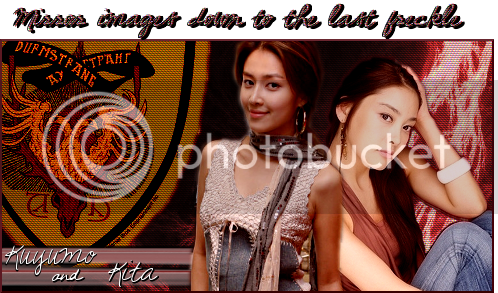 Calcifur didn't even bat an eye as he unclenched his fist from his wand and stared down at the young woman. His assessment of her took all of five increasingly disturbing seconds as he studied her from top to toe. By the end of it, he wasn't particularly impressed. She was sweet enough to look at, but she had just witnessed his transaction and was apparently compelled neither to scurry or at least ignore the goings on, but rather smile and openly address him. Kids these days, thought Calcifur sourly. They have no idea what's good for them. Well, at least she looked like a child to him, but his height did have him assume that about most young women, anyway. He avoided the opposite sex like the plague. Meddlesome creatures. The silence became progressively more uncomfortable as he continued to stare at her, till it broke as the vendor let out another curse. Without looking down, he nudged the fellow onto his stomach and cared not when there was another spitting swear as he finally scurried off. "Mudblood filth, battering poor Gussie with his steel capped boots, undressing the poor young witch with his eyes, she's probably a Mudblood, too-" and on till he had all but disappeared into a smelly crevice between two shops. Calcifur didn't particularly want to lose face in front of the pretty stranger, but he did so want to spit on the wizard as he limped past.

"Cal-san," said Calcifur finally. He removed his hands from his pockets and returned to assessing the witch, considering whether or no it would be worth the hassle of buying her silence. What he had 'purchased' wasn't dark in origin, but it was illegal to trade and he didn't particularly want to end up in Azkaban, Dementors or no Dementors. Beating her into submission sounded quite below him and torture was not much better. Surely the package wasn't that important to the client ... buying her off sounded like the better option, but by the way she was dressed and the part of Bleak she was in, it didn't seem likely that she would accept. He scowled, finally amending, "What do you want?".​
Show hidden low quality content
You must log in or register to reply here.