Professor Misha Haden was entering, what he believed was his fourth year of teaching at Hogwarts, and in those four years, he had seen four different professors of the young years. He had no idea why they just seemed to come and go so quickly, but he was happy that at least they'd managed to find another person. He had quite liked Professor Killan, but he had appeared quite strict, and Misha really wasn't. He was a pretty laid back sort of person, and this was sort of rolled into his teaching style. He loved teaching however, and even since that first time he'd been in front of a class he'd known it was the career was for him, so he'd decided to do it. He'd been incredibly pleased when he'd gotten this job. It still left enough spare time that he was able to do some extra marking on the side, and further his knowledge of charms. It helped bring a little more in and kept him busy. He wasn't really busy outside of school work, Misha lacked a social life. He didn't really have anything for that. He wasn't really thinking that he and the new professor would become firm friends, but he was sure that it would be at least welcome him to the job and wish him all the best. Misha had prepared a small gift, it wasn't anything large or fancy, just a simple bottle of wine and a box of tea. He wasn't sure if this new professor was much of a drinker, or tea drinker, but they weren't gifts outside the realm of normal.

The young professor gathered the items, and had them float next to him as he finished the last of the extra work he'd gotten. Misha did not have any classes that day, and was therefore dressed much more casually. He had his jeans on and matched this with a t-shirt. He was keen to make a good impression, but since he only taught the upper years, Misha's work was mostly towards the end of the year with the OWLs and the NEWTs. The start of the year was always a busy time for the new professors, and especially those who taught the busy younger years, where it wasn't for him. Unlike Misha the new professor had to deal with all the students who knew nothing about anything. Who asked a lot of questions, and just generally meant that he had a lot more work to begin with than Misha did ever have. By the time the students got to him, there were much fewer and he was perfectly happy with that. Stood outside the man's door, Misha knocked on it. The gifts still floating behind him. He hoped that he hadn't come at too bad a time. He was looking forward to meeting the man, and seeing if he was up for the job. He had seen him at the welcome feast, but hadn't managed to talk to him. Now, Misha just had to hope that he was there so that he could in fact welcome him to the glorious subject of Charms, and wish him all the best.
​

Biography | Relationships | Thank you to the amazing Anna for the banner! It's perfect!​
J

Professor Justin Joussane was still trying to get used to the idea of being a teacher or a professor. He had never thought after all that he would be able to get this job. Aside from the fact that he never had an experience in teaching before, he was only trying to get into the castle to watch over his little sister. He knew that their brother's recent death would have had a big impact on her seeing as she was the closest to him, and Justin knew that his sister had a knack for doing stupid things. He should know it best considering that he practically raised her. And then, in his best intentions, he had landed on a teaching job which was far from what he had been used to. He was a waiter for Merlin's sake! A muggle waiter to be exact. And now here he was, in one of the most known wizarding schools, just to teach Charms to the young ones. They weren't even that much younger than he is. With a sigh knowing that his thoughts were trailing off, he decided to work on the students' grades. Merlin knows he still had a lot to do to get used to doing this stuff.

The rather young man continued on with his work and though it was tiring, he had to admit that he was enjoying working with the younger years as well. He clearly didn't like dealing with teenagers and their rampaging hormones. He had enough of that back in France and for him it was much easier to deal with the young ones who were only mostly curious about the wizarding world. As his train of thoughts were once again getting lost in their own realm, he had heard the subtle knock on the door of his office and he couldn't help but wonder who it is. After giving a quick lookover to the work of one of his fourth years, he opened the door to his office with a swish of his wand. He then looked up to see who the perpetrator was and was quite surprised to see a co-professor. None other than Professor Misha Haden. Justin knew him, after all, they were both teaching Charms, and he made it a point as well to know the names of the other professors in Hogwarts. He stood from his desk and smiled at the professor. "Professor Haden, come in. What brings you here?" he asked as he quickly went to the door and ushered the man into the room. 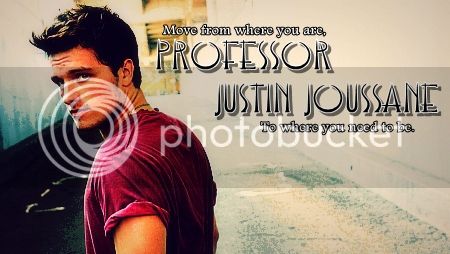 Professor Misha Haden didn't really like waiting at the door of this man's office. But, he was anyway. It didn't however take that long before the door was opened and he was graced with the sight of the new professor. Misha knew that his professor was fairly young, and from looking at him he could definitely see that. Happily he smiled at the younger man, Misha had been young when he had first started, and now he was in what was his third, or fourth year of teaching. It had been a surprisingly long time to him. Even though he was happier doing nothing he loved teaching more than anything else. And was always incredibly glad that he had the opportunity to start teaching so young and have such a secure job. "Please, amongst professors it's just Misha" he told the younger of the two with a smile. He didn't really do formalities with his fellow staff. He wondered if that was perhaps a flaw of his to a certain extent. But, it didn't really matter. He wasn't going to force this man to call him professor, he could call him Misha or Haden, if he felt like it. It didn't matter, they were working together that was all.

Misha made his way into the office and smiled at the man who had invited him in. With a small flick of his wand, he brought in the gifts which had been floating next to him. "I thought as the other Charms professor, I'd welcome you to the subject" he said with a smile. "And I brought you a little welcome gift." he flicked his wand again and the gifts sat down on the desk of the younger professor. "Welcome to Hogwarts" he said brightly. It was always nice to meet new people and more specifically new colleagues. "How are you finding it so far?" he asked, wanting to see if he could be of any help to the new professor, but knowing that this man if he'd been hired by the headmistress was probably incredibly capable and more than likely to do well in it. Misha trusted the headmistress' opinion when it came to hiring new people.
​
ughh this is awful, sorry

Biography | Relationships | Thank you to the amazing Anna for the banner! It's perfect!​
Show hidden low quality content
You must log in or register to reply here.