Open The Research of a Ghost

It had been a day since Giselle arrived in Hogwarts. After the night of arriving in Hogwarts, and getting to know the roommates that she would share a dorm with for the next seven years, she came to realise that some of them are a wild bunch. She hadn't really made any friends either when arriving into Hogwarts, but she knew it would take a while for her. Giselle decided today that she was going to sit outside and continue her reading of ghosts. She recently had a high interest in ghosts and all things paranormal. Giselle was hoping to see a ghost in Hogwarts, but it had disappointed her that she wasn't able to witness one just yet, if there were any hovering around in Hogwarts for that matter.

Giselle walked out of her common room and made her way to the Great Lawn, it was a bright and sunny day, she knew that she had to check out the beautiful flowers they had out in the garden to sometime. She found a nice shaded spot, underneath the tree and opened her book, to continue her research.
B I O G R A P H Y | A E S T H E T I C

Aisling stepped outside and breathed in the fresh air. Closing her eyes, she took a moment to think back on the past few days. It hadn’t quite gone like she had expected, but she tried to think on the positive side. Some of the girls in her dorm were nice. And she was looking forward to classes starting.
Her original plan was to go for a walk and check out the grounds a bit more, but she spotted a girl underneath a tree reading a book. Perhaps she was wrong but the girl seemed familiar...? Thinking, she suddenly remembered her as the girl from the park. They‘d had a long conversation about Hogwarts. Aisling wondered how she was getting on. Smiling, she walked up to her. “Hi, Giselle, isn’t it?” she gave a little wave. “Um, I’m Aisling. We met at the park a while ago, remember?”

Giselle looked up from here book when someone had to interrupt her from her peaceful reading, and realised that it was a girl who look familiar to her. "Uh, yeah it is" Giselle says quietly,trying to process and think where she met this familiar girl. Giselle then remembered who she was. "Oh, yeah, I remember you" Giselle says with a slight nod and a small smile. "You enjoying Hogwarts?"
B I O G R A P H Y | A E S T H E T I C

Aisling smiled and sat herself down next to Giselle. “Well, it’s certainly interesting.” She paused and thought for a second. “The library is really cool. So is the great hall.” Aisling scrunched up her nose. “My dorm mates are a mixed bunch though. Some of them are nice, but the rest are just...how do I say this...strange? Yea.” She chuckled softly before turning to Giselle. “ What about you?”

Giselle nodded a little when Aisling had discussed what was cool at Hogwarts. "I haven't done much exploring yet, but I will sometime." Giselle says with a small smile as she closes her Ghost book and places it on her lap. She can get back to more researches on ghosts later. "My dorm mates are also a mixed bunch. There are some loud ones and some quiet ones. But they're okay I guess" Giselle says with a small shrug. She hadn't really gotten know her dorm mates yet, but sh'ed see them everyday so there's always time to get to know them. "One of my dorm mates and I have the same name. She seemed really annoyed by it" Giselle says with a sigh. She didn't want to be disliked by anyone, all she wanted was to leave, but that's karma I guess.
B I O G R A P H Y | A E S T H E T I C

Aisling nodded. “I guess it’s weird for everyone, suddenly sharing a room with a bunch of strangers.” She listened as Giselle talked about having the same name as one of the other girls in her dorm. “Well she’s just going to have to live with it I guess. I’m sure she’ll get over it,” she replied.
Sighing, Aisling put her head back and closed her eyes, letting the sun warm her face. “Ugh, I’m looking forward for classes to start. I just want to get stuck into this year.” Looking up, she turned and smiled at Giselle. “Hey, maybe we’ll have a couple of classes together. That’d be cool.” 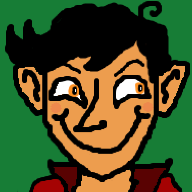 Vex had been floating, invisible, above a tree on the Great Lawn, trying to think of a way to convince the groundskeeper that he definitely needed a slide built. There were many staff at the castle, but he did not know who exactly was the groundskeeper, and whilst he could just ask the Headmistress, the non-being knew how that would end - she would tell him to not bother them. And that just wasn't good enough. After all, it might take some... convincing to get his slide, and he needed to be able to claim innocence when he eventually bothered the groundskeeper enough to get sent to the headmistress.​
​
The students were ignored for a few minutes, but even a chaotic being such as himself needed another perspective. In the past, some of the students gave decent ideas, and maybe these small ones would be of some use - and if they weren't, he would just use them to further perfect the consistency of his slime. It was a win-win! Maybe he'd still do it even if they were useful...​
​
Orange eyes peered down from within the tree when he sunk down and became visible, laying over a trunk with his head turned at an unnatural angle. "You!" he yelled suddenly, pointing at the Slytherin, and then the Ravenclaw. "And you! You can help Vexxie. Yes, certainly. Where's the Groundskeeper?"​
If you want a roleplay, PM me.
~ B I O G R A P H Y ~

This amazing banner and av were made by Jesse!

Aisling looked up in surprise as someone started yelling excitedly at them. It was the poltergeist from the feast who had initiated the slime and food fight. She shuddered thinking back at the chaos that had ensured. Getting the slime out of her hair had not been fun and she was a bit scared that he might have some more slime hidden somewhere. And now he was asking them a question which she most definitely did not know the answer to.

She looked back up again, wincing at the unnatural angle his head was turned in. He was definitely talking to them. “Um, I don’t know,” she called back. “You’d really have to go ask someone else. Sorry.” Aisling kept her gaze on the poltergeist, cautious as to what he would do next.